STORIES AND THEMES
of our own Treasure Hunts

1. The Quest of Eco Worrier

This Treasure Hunt involves concerns about sustainability
and environmental responsibility.
You have a series of challenges to save the planet,
finding recyclable materials, following your carbon footprint
and discover who is polluting us.
Some cryptic clues lead you to interesting locations
where you use the information to reach the next stage.

Are you an Eco Warrior or Eco Worrier ?

2. The Quest of the Matrix

This is a secret agent and 'matrix' themed Treasure Hunt.
You are trapped in an alternate reality controlled by a massive computer programme.
Achieve the tasks and follow the clues to be the first team to win freedom.
This is a Treasure Hunt with additional tasks and challenges.

You win 'bytes of freedom' and the team with the most can escape from the 'May Tricks'.
Be warned!
There are anti-virus agents around searching for you.
They consider you to be dangerous and will try to trick you,
eliminate you and wipe you from memory!

Can you escape the control of the May Tricks?

In this Treasure Hunt, your group are needed by elite anti-terrorism force
called The Cobra Committee.
They have mistakenly disposed one of their top agents
and now you have the task of finding him before it is too late.
Intelligence sources have informed us that this rogue agent has planted
a ‘Trail of False Clues’ nearby.
The only way he will admit defeat and return to the fold
is if you can find and de-activate this trail and the device it leads to.
This treasure hunt is a type of 'Spy Catcher'. 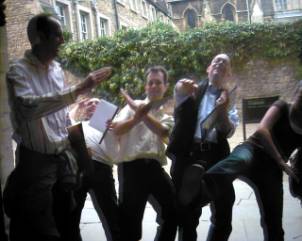 'The Case of The Missing Man'
Your teams are investigating the disappearance of Professor Moriaty,
Sherlock's evil nemesis.
You follow clues and complete the Sherlock Holmes themed challenges.
Can you decipher codes and passwords
to discover the location of the professor ?

5.  Quest to be Laid by the Hen,
A Hen Party Treasure Hunt

“Poof,” in a cloud of smoke your Fairy Godmother appears
before you, she is bringing good news.

Prince Charming is in town and has given Fairy Godmother
the challenge of finding him a bride.
He would like a bride with intelligence,
courage, inventiveness but above all, a girl who likes to have fun.

Ideal for Hen Parties, in this treasure hunt you must compete for the Prince’s love
by completing tasks and solving clues.
Only the team that has the most fun will gain the most points
and win a life of luxury in a land 'Far Far Away'.

Captain Silver wants you to crew his ship.
He is on the search for fame, fortune and riches.
Your group must compete to become pirates under Captain Silver’s command.
He will only take the team who are the worst scallywags
and those that most deserve to share bountiful treasure and glory.

7. The Quest for the Missing Link

Sightings of a mysterious Dodo have been reported in the last few weeks.
This Dodo is unusually large, almost to the height of a small child.
Experts believe it could even be a new sub species.
Locals have nicknamed it ‘Blue’ due to the bird’s very unusual blue spiky hair.
Several rewards have been offered for Blue’s safe capture.
It is imperative you find this Dodo and put it into a safer environment
before its is too late.

You follow a trail of planted clues to the end location,
completing challenges on route to find the treasure.  This Treasure Hunt can work around a venue,
city centre or tourist attraction
and is linked to the history of the area.
You link the answers to coded message so that
the 'Box of Treasure' can be discovered.

All our Treasure Hunts can be provided at our existing locations or
any new location of your choice.